The Sun is the star that lies in the center of the solar system. It is surrounded by an atmosphere of hot plasma - the chromosphere (lower layer) and the corona (extended upper layer). The Sun's magnetic field, created deep in the solar interior, permeates the Sun's visible 'surface' (the photosphere), and dictates the motion and behaviour of the atmosphere. The atmosphere is in a state of constant change, over long and short timescales, and small and large spatial scales. From this complex environment, the solar atmosphere expands out into space as the solar wind. This continous stream of hot magnetised plasma fills interplanetary space. Rapid changes in this flow can disrupt Earth's magnetic field and cause space weather. The magnetic field in the corona can be twisted and stretched to high-energy configurations that can become unstable and erupt as flares or coronal mass ejections. Furthermore, even in the absence of such catastrophic eruptions, slow and fast streams in the solar wind can interact and cause disruption. Our research at Aberystwyth is addressing several key questions of this huge system:

Our main line of research is to develop new data analysis methods to help answer these questions. This ranges from analysing certain properties of sunspots and active regions to predict flares/eruptions, advanced numerical modelling of coronal magnetic loops to study magnetic plasma behaviour, to tomography of the extended solar atmosphere to find the large-scale 3D structure.

As solar scientists, we are lucky to have access to a wealth of detailed observations of the solar atmosphere. Images can be processed to reveal more detail, or to enhance certain characteristics, such as the signal from moving features, for example. Measurements of the light emitted by the corona can also lead to estimates of useful physical quantities such as temperature or density. This archive contains several hundred thousand images processed in different ways which you can browse. If you use these products or software, please cite the relevant publication and this website. We are also heavily involved in scientific eclipse observations, which feeds into many of the scientific studies highlighted here. All of our processed data is based on the observations of several excellent space-based instruments. Links to these instruments/missions are available here.

Global temperature of the solar corona

500,000 AIA/SDO images (~12 trillion pixels) are used to calculate the changing global temperature of the corona over several years from the previous solar minimum to 2016. The changes are connected to changes in emission measure (~mass) and magnetic field, and the modeled EUV irradiance at Earth compares well to measurements by EVE/SDO. Quantifying the link between temperature and activity (sunspot index) will help model the expected EUV irradiance before the advent of direct observations. Such a large-scale study can also allow comparison of relative changes in magnetic field and temperature, of interest to models of coronal heating. 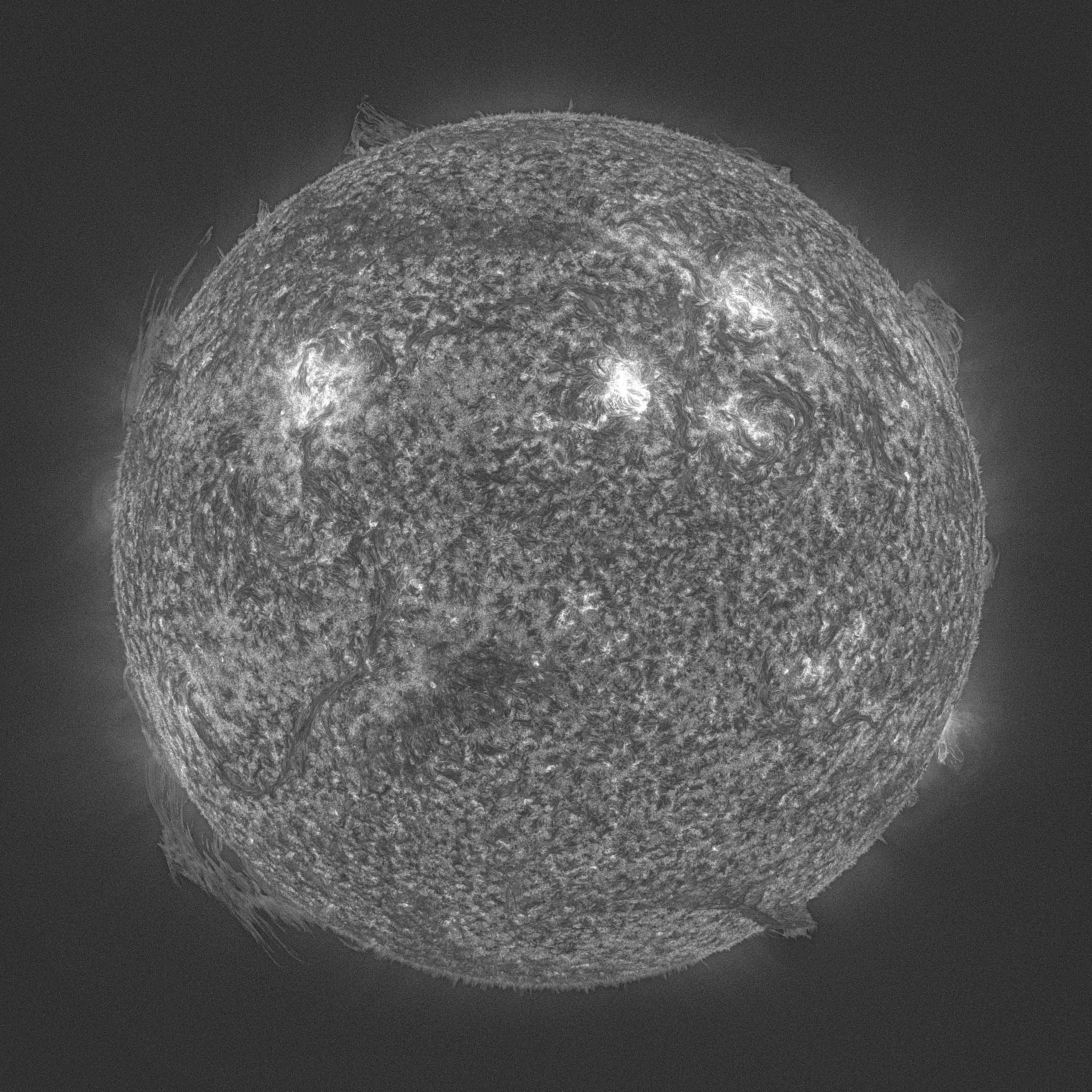 Coronal mass ejections (CMEs) are generally associated with eruptive phenomena in the lower corona such as flares, filament eruptions, EUV waves or jets, collectively known as low-coronal signatures (LCSs). CMEs lacking these signatures are identified as 'stealth' events. Our new image processing techniques are used to study events previously classified as 'stealth' CMEs. The processed EUV images reveal LCSs for all the listed 'stealth' CMEs ranging from flares and jets to filament eruptions. Many events identified as CMEs are small blobs or puffs, often occurring in the aftermath of a large CME. Several of the larger, structured 'stealth' CMEs arise from the slow eruption of sizeable, faint flux tubes situated at high latitude and large heights, therefore in regions of low density and weak magnetic field. 'Stealth' CMEs are therefore a misconception arising from observational and processing limitations. This work highlights the importance of image processing methods to reveal faint yet important detail in data.

Automated tracking of CMEs in 3D 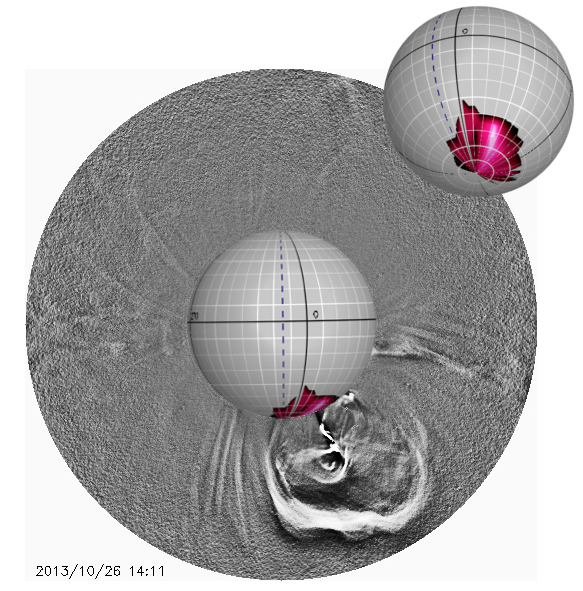 We have developed a new, automated method of detecting CMEs in three dimensions using data from the LASCO C2 and STEREO COR2 coronagraphs, named the Automated CME Triangulation (ACT). By triangulating isolated CME signals from the three coronagraphs over a sliding window of five hours, the most likely region through which CMEs pass at 5 solar radii is identified. The center and size of the region gives the most likely direction of propagation and angular extent. All current CME catalogues (CDAW, CACTus, SEEDS, ARTEMIS and CORIMP) rely on plane-of-sky measurements for key parameters such as height and velocity. Estimating the true geometry using the new method gains considerable accuracy for kinematics and mass/density. The results of the new method will be incorporated into the CORIMP database in the near future, enabling improved space weather diagnostics and forecasting.

Some solar eruptions can be very dramatic and rapid with little warning, but others are more gradual and relaxed, and occur as part of a more general rearrangement of the corona. This work reports on observations by the LASCO C2 coronagraph aboard the SOHO spacecraft of a series of fast "puffs" exploding into interplanetary space, approximately once every three hours beginning on 17 January 2013. These puffs coincided with the slower eruption of a more massive structure. Analysis of SDO/AIA images show they were caused by flare-associated jet-like eruptions taking place in an active region near the Sun�s limb. The jets are caused by reconnection as a small region of opposite magnetic polarity emerges in the active region, which also allows the more massive structure to slowly erupt. We believe the active region jets are both the direct source of the fast puffs and, indirectly, the cause of the slow eruption. Faint coronal disturbances resulting from flares/jets may be common, but are usually obscured by associated ejections. In the case here, the material ejections are absent.
This work is published in The Astrophysical Journal (2016), Volume 823, Issue 2, available here.

The Different Sources of Structured and Unstructured CMEs

This detailed statistical survey applies powerful new image processing techniques to a large dataset of hundreds of erupting filaments and coronal mass ejections (CMEs), resulting in findings of importance in the field of space weather. We show that the front edges of structured CMEs are the top part of a large pre-existing magnetic flux tube, with the actual filament lying within the bottom part of the flux tube. The filament forms the dense core of the CME. Furthermore, we show that unstructured CMEs are a different category to structured CMEs, in that they are not formed from a large pre-existing flux tube. This also has implications for the field of solar filament research since it suggests that many filaments do not possess a large enclosing magnetic flux tube. The image shown here indicates the difference between a CME with a clear 3-part structure (Bright leading front, dark cavity and bring central core) and an unstructured CME.
This work is published in The Astrophysical Journal (2015), Volume 813, Issue 1, available here.

Exploring the Connection between Prominences and the Corona 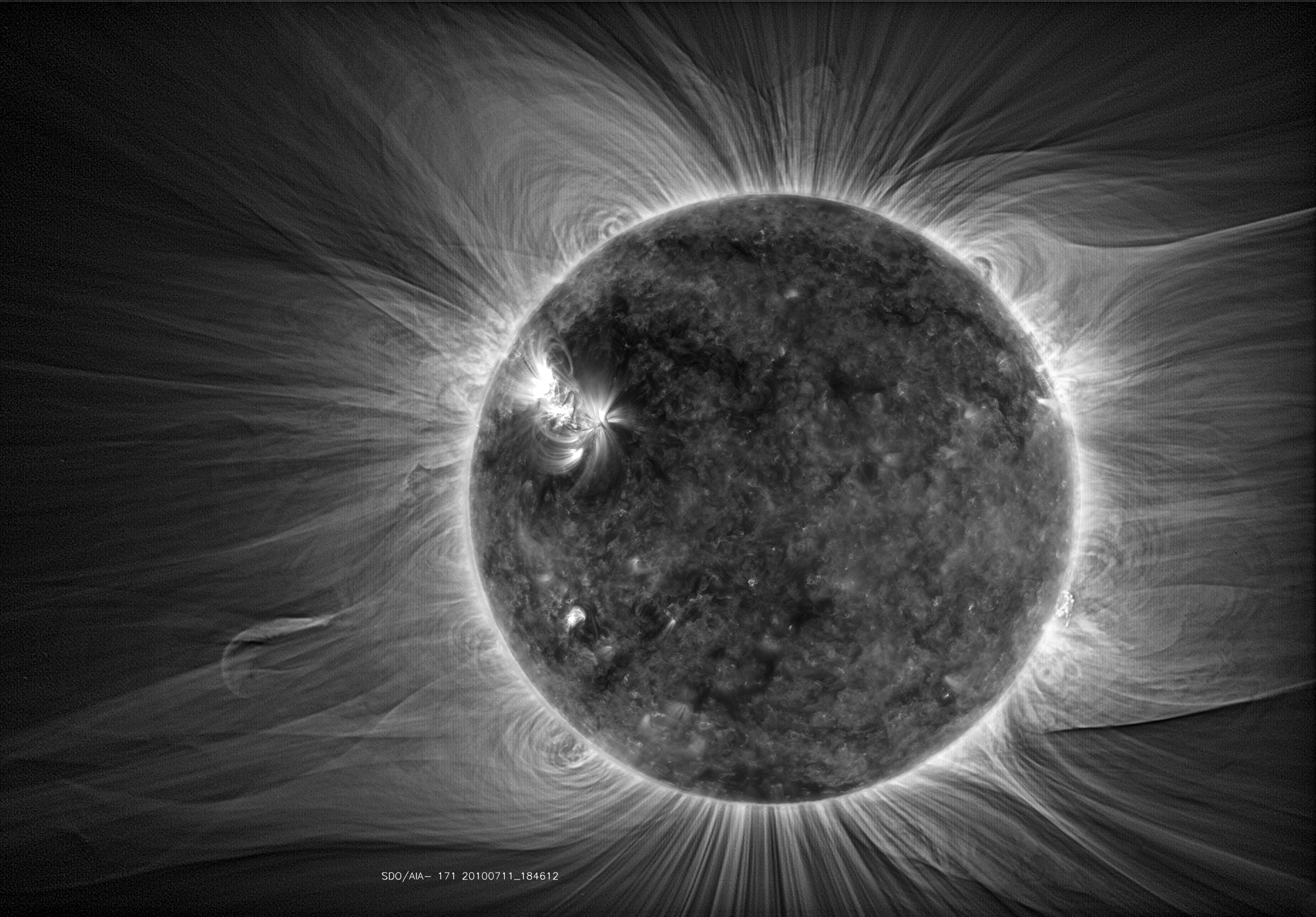 Our unique eclipse observations, combined with our state-of-the-art image processing methods, have revealed for the first time the unravelling of tightly-wound magnetic structures on the Sun, and their subsequent untwisting and outflow into space. This is an important result since it can explain a long-standing mystery of some solar wind measurements far from the Sun and provides a mechanism for the Sun to shed magnetic helicity (twist).
This work is published in The Astrophysical Journal (2014), Volume 793, Issue 2, available here.

Application of image processing methods to the latest data reveals this interesting event where a huge eruption from the Sun stalls in mid-eruption, stops, then continues to erupt. This has important implications for the interpretation of how eruptions are triggered and released from the Sun.
This work is published in Solar Physics (Springer, 2014), Volume 289, Issue 12, available here.

Discovery of active region expansion to large distances from the Sun

Advanced image processing of LASCO C2 observations reveals the expansion of the active region closed field into the extended corona. This is the first discovery that regions of hot magnetic plasma which emerge from the Sun's interior into the corona can actually continue to expand out into interplanetary space. This is an important discovery in addressing the mystery of what is the source of the slow solar wind.
This work is published in The Astrophysical Journal (2013), Volume 206, Issue 2, available here.